Russian businessman,
the founder and president of Energomera Group 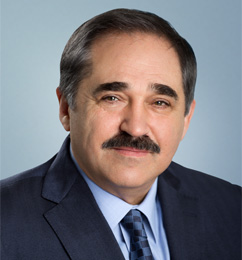 Born in 1953 in the town of Novy, Khabarovsk Krai.

In 1976 graduated from Tomsk State University of Control Systems and Radio electronics with a major in Design and Production of Electronic Equipment.

Started career in 1977, where he worked at Gomel Radio Plant as a supervisor, shop foreman and eventually deputy chief engineer.

Starting in 1989 worked as a chief engineer at Stavropol Radio Plant "Signal".

In 1994 Vladimir Polyakov established his own company "Energomera".

At the time three viable business entities were created:

Production of electronic materials and components: 49,5% % of the global market of synthetic sapphire for optoelectronic industry

36% of the Russian market of electricity meters

An agricultural cluster represented by three enterprises with a total bank of 85000 hectares.

More than five thousand jobs have been created. The company incorporates four high-tech factories in Russia and also factories in Ukraine, Belarus and China, two design institutes as well as sales offices in Taiwan, South Korea, the Netherlands and the USA.

Vladimir Polyakov is a Professor Emeritus at the North Caucasus Federal University as well as a member of the Board of trustees of Tomsk State University of Control Systems and Radio electronics.

in 2004 by a decree of the President of Russia Vladimir Polyakov was awarded with the Order of Honor for his contribution to the social and economic development of Stavropol Region.

In 2006 he was awarded with "Hero of Labor of Stavropol Region" for innovations and achievements in development of industrial manufacturing.